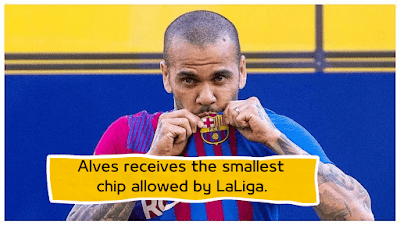 The Brazilian footballer has prioritized his arrival at Barcelona, regardless of the fee he will charge for the six months he will play at the Camp Nou.

Dani Alves has been paid very little because the club is still in a very delicate economic situation. The wage bill continues to weigh heavily on the Directive, leaving it with little room to move in the market.

It has closed two operations in the last few days, one for Xavi and his technical staff and one for Dani Alves, both for a small sum. The coach cost 3.9 million euros, which is what LaLiga allowed them to pay for him.

Dani Alves' situation was also complicated because there was no margin in the salary bill. Mateu Alemany himself stated that they had spent everything and that there was not a single euro left to go to the winter market to find reinforcements. And that the cost of Alves has been kept to a minimum. The Brazilian has the lowest chip count of the entire team.

According to La Vanguardia, which was published and confirmed by this newspaper, he charges the bare minimum that LaLiga allows for a professional First Division footballer.

Alves earns 155,000 euros per year, which is far below his cache, despite the fact that he is now 38 years old.

Barcelona has taken advantage of the footballer's strong desire to visit the Camp Nou and has welcomed him into their ranks. There have been two significant factors.

One has been his interest in coming, as well as the approval of Xavi Hernández, who believes the Brazilian can add character and joy to a squad that desperately needs it. The other, however, has been the economic one. Alves wanted to come at any cost and accepted the lowest offer.